Star Trek – So Bad it Doesn’t Deserve a Title

A PSA on movie tie-in games; don’t buy them, that is all.

Perhaps some context is in order for the diehards among you. The new Star Trek game, called Star Trek, a video-game tie in for the Star Trek movie, set in the new Star Trek continuity, sucks massive, throbbing forehead ridges. It is bad, buggy, uninspired, and yet this is entirely par for the course for movie tie-in games. What gets me is that money keeps being poured into these things, presumably because someone out there is buying them. Well my message to all of you that have considered buying a tie-in game is PLEASE STAHP.

Think before you buy should be everyone’s motto in an age of thin wallets and fat price tags, but that doesn’t seem to stop people from being blissfully unaware of reality or history. The reality is that most tie-in games, the very vast majority of them, are bad, and if one of them somehow turns out to be good, this news will be plastered all over the internet. The good ones are so few and far between, that there is probably just over a dozen of them in all of video game history. So please, don’t buy into the IP, the trailers, the hype machine, and especially not the preorder, and instead wait for some decent reviews from your favorite review site before you give these people more money to make crap like this. 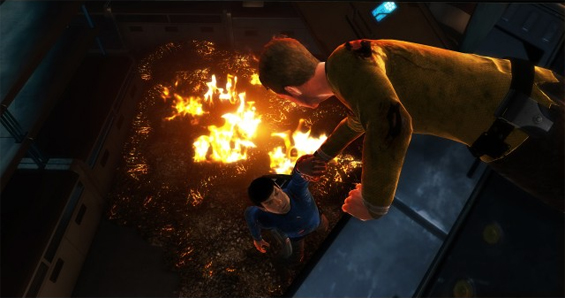 To address this latest fiasco, Star Trek, the game that came out on April 26th 2013, because that’s the only way to refer to the damn thing, is bad. It’s full of bugs, the story might as well not be there, the gameplay is insipid and dull. It’s a horribly designed third-person cover shooter that happens entirely in linear corridors full of a handful of identical enemies. And perhaps most egregious of all, the co-op in the game, arguably its only real selling point, doesn’t work for most people.

Worry not though, because the lead designer of the game took to the Steam forums earlier in the week to state that the co-op works fine for him, and thus all is well. This was further compounded by a slew of positive metacritic scores of questionable origin, before any actual reviews went live on review sites. And yet again, this is par for the course when it comes to movie tie-in games. Thus I’ll just leave you with this; for the price of this game, you can go buy all 3 Mass Effects and go watch the actual Star Trek movie, probably twice. Think about it.