Opinion: On Magrunner and Fhtagn

You had one job Magrunner, one job! And you couldn’t even get magnets right! Well, technically they’re not actually magnets, they’re some sort of proprietary MagTech. Some context should help clear things up. Magrunner: Dark Pulse is a first person puzzle-platformer brought to you by the fine devs over at Frogwares and 3am Games.

You play as Dax Ward, one of the seven lucky contestants chosen to take mankind into the future and/or space by overcoming a series of convoluted puzzle challenges, thereby proving that MagTech is where it’s at. Going a bit further, this contest thing was held by an evil mega-corp that controls LifeNet. Used by everyone and yet oddly undefined, LifeNet appears to be some sort of new internet under the rule of Facebook, but in your brain. Back to Dax, who, armed with his dad’s brains and his mom’s good looks, is now ready to take on the grueling 3 months of training/trials that lie before him. Oh, and he’s got a mutant buddy named Gamaji on speed-dial. All that incredibly vague and yet important exposition out of the way, lets get into the game. 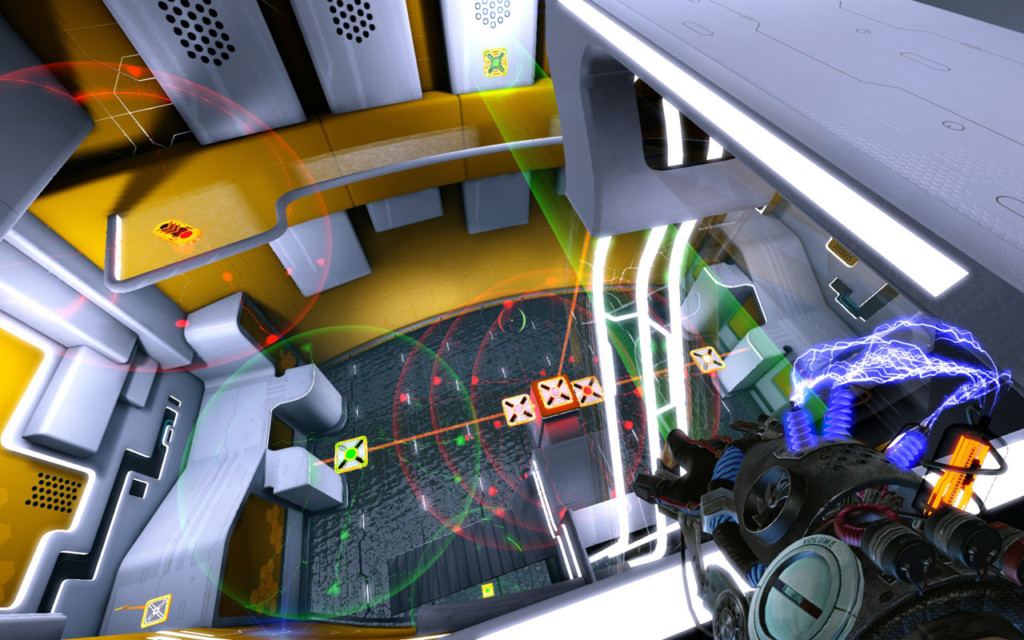 The main gimmick behind Magrunner is Dax’s custom MagGlove, which I assume he needed to make on his own because they were out of Power Gloves and you don’t buy off the rack in the future. This handy little toy allows you to shoot out two color-coded charges at specific objects, which then gain a corresponding Mag field. Bring a charged object into the field of another object of the same charge and they’ll attract each other. Should the fields have a different charge, the objects will repel each other, right outta the room if you’re not careful. So no, it’s nothing like magnets, but it does make for an interesting puzzle mechanic.

Speaking of the puzzles, they’re presented to you in the form of large individual rooms that house a collection of strategically positioned MagStuff which lets you get from one end of the room to the other. Sound like Portal yet? Well that’s because it is a lot like Portal, although that’s by no means a bad thing. Portal itself is a really good game, with a lot of cool ideas and neat features, and borrowing a couple of the broader ones to do your own thing with makes a lot of sense. On the flip side, if your game reminds people of Portal, then inevitable comparisons will come up, so what ultimately matters is what you end up doing with those concepts. 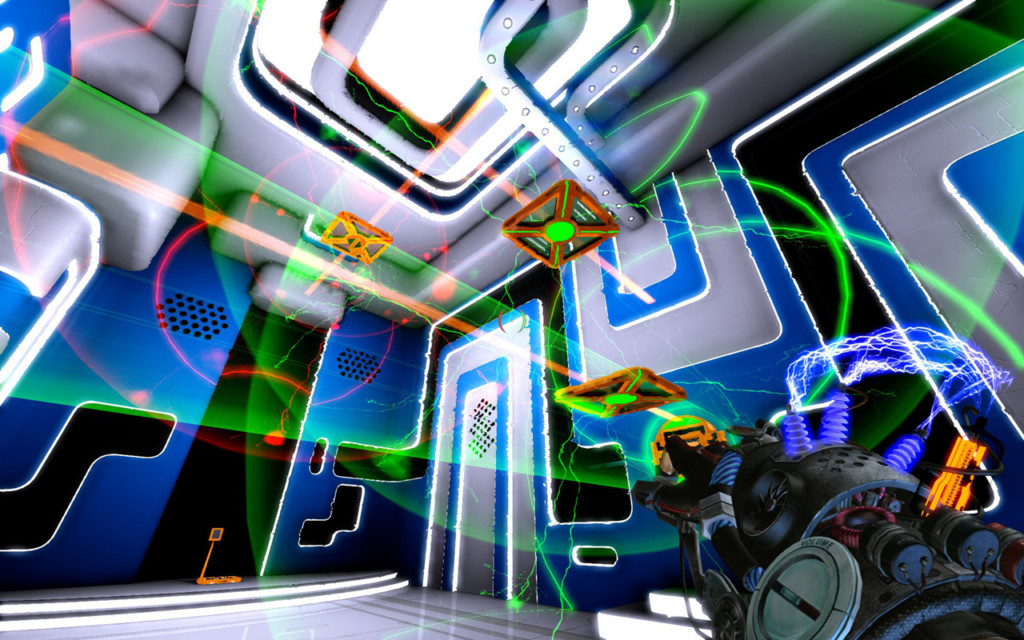 Much to its credit, Magrunner does a lot of cool things with MagNets, or faux magnets, or whatever I can call them without someone raising an eyebrow at me. It also starts you off simple; you’re introduced to the basic elements you’ll spend a lot of your time manipulating, and then given a puzzle or two for each one to get your head wrapped around it. Naturally, as things progress, you’re shown more and more ways that these things can interact, and once again to its credit, the game likes to keep the number of individual components low and their interactions high.

For example, one of the first concepts you’re introduced to is bouncing a crate off a charge. Simply place an empty crate in the center of a Mag field and hit it with the opposite charge to watch it fly straight up. Do so with two crates, bottom one first, and watch them bounce even higher. Soon enough you’ll be bouncing crates off of other charged fields into the waiting hands of a charged platform you previously moved into place, just so you drop it on an turret that’s blocking your way.

The puzzle rooms themselves come in a variety of shapes and sizes, and initially these are all immaculate and colorful representations of what happens when you give an interior decorator a blank check and tell him to go nuts. On one hand it’s refreshing and kinda nice to play around in, but also very sterile and foreboding. Before you get a chance to get accustomed to this unusual aesthetic though, all hell breaks loose as the walls start coming down around you, all to the tune of “Ph’nglui mglw’nafh Cthulhu R’lyeh wgah’nagl fhtagn”. 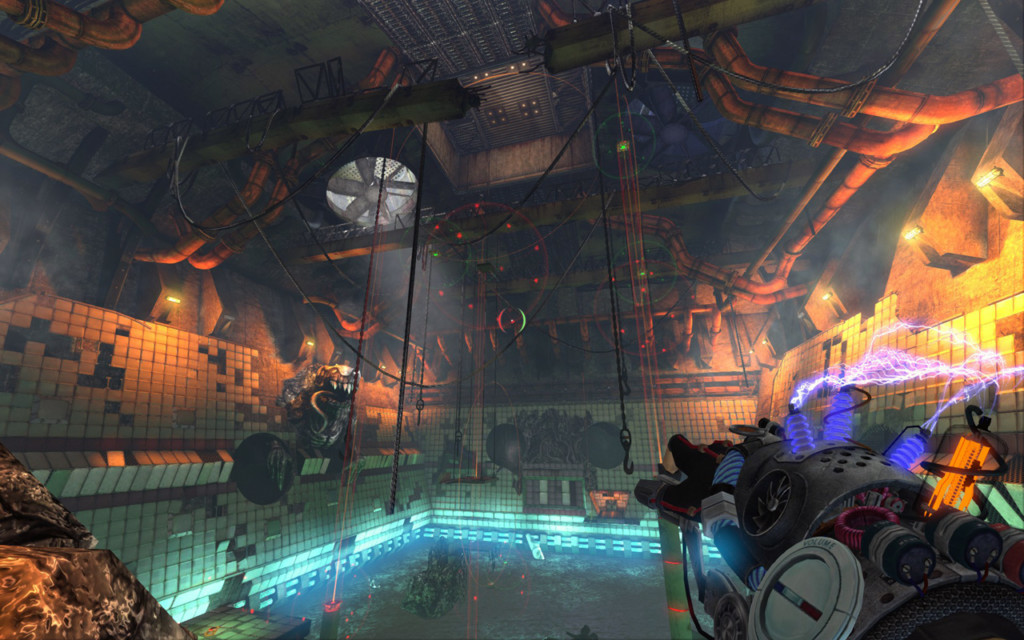 One second you were just minding your own business, and then somebody flipped the Cthulhu switch and things got crazy in the blink of an eye. Well, at least outside of the complex you’re currently in, as Dax is still stuck solving puzzles in whatever direction all of these rooms are leading him in. Meanwhile, evil fish people are on a rampage, power and utilities are going out all over the world, people are going insane, and it seems like society as a whole is crumbling under the onslaught of insanity given form. Well, maybe, as Dax’s only point of contact to the outside world is the handful of people that decide to occasionally ring him up whenever he walks into a new room.

Thus, the game goes straight from ‘sterile yet colorful’ to ‘rust covered techno-ruins’, which makes no sense at all considering this entire complex was supposedly newly built. On top of the sudden influx of brown and gray, you’re also treated to insane rambling written on walls, the odd glimpse of a fish person/demon/thing, and plenty of images of either Cthulhu or just alien figures looking creepy. This is where the second big issue with the game becomes glaringly obvious, as it never really seems to commit to the horror aspects of Cthulhu and is instead content to simply be somewhat unsettling or just kinda creepy.

The fact that any and all of the would-be horror is served up to you in between long stretches of otherwise uneventful puzzle solving does absolutely nothing for the pacing of the story either. No amount of creepy music or eerie wall paintings is going to make me feel unsettled if I know that nothing’s gonna happen until I’m ready for it. I have to draw the parallel to Portal 2 here, in that Portal 2 realizes that there’s a lot of dialogue, exposition and setting the mood that it can do mid puzzle, as opposed to just relegating that to cutscenes and phone calls at the start of every room. 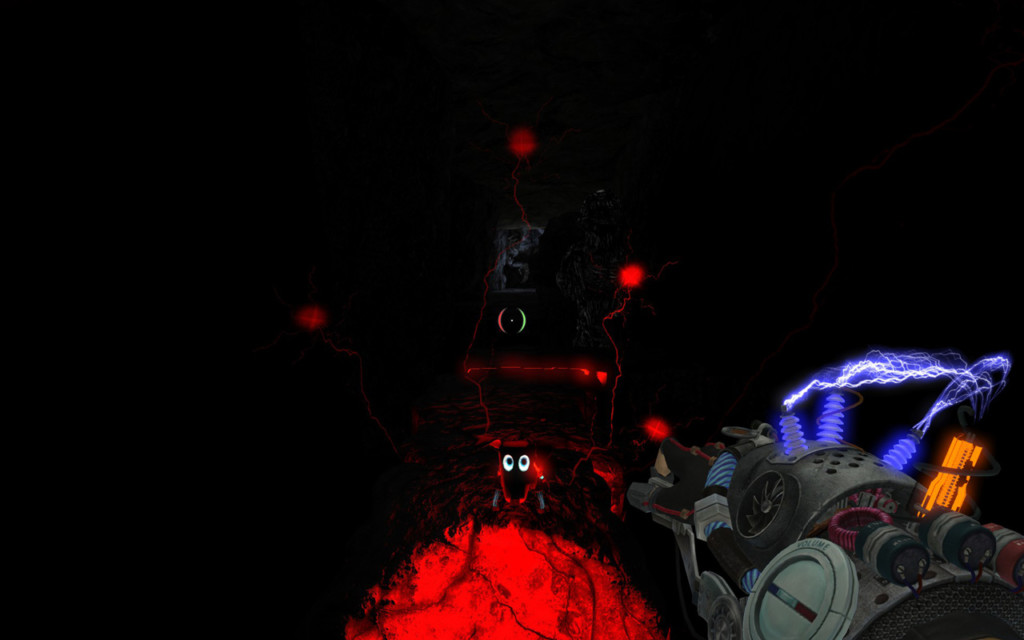 To get back to the puzzles for a minute, by this point in the game they’ve already gotten fairly complex, and will require a bit of thought as to how you’ll be putting the various pieces together. You should also expect to have to go looking for all the pieces you’ll need, as they have a tendency of being hidden in various weird places in the room in question. This kind of stuff is really cool, but the game doesn’t do much with the fact that it’s making you explore nooks and crannies. What’s the point of a secret room when there’s only a single crate down there for example?

There really isn’t any interaction between the Cthulhu stuff and the puzzle elements until the very end of the game, and even then, the interactions are few and limited in scope. Which is a damn shame, considering the puzzles themselves can actually get rather clever. Sadly though, they never require you to see the whole picture before you can solve the puzzle, and instead tend to become a bit formulaic after about half way through, as you fall into the routine of solving an individual section of the puzzle before moving onto the next. Rinse and repeat until you’re out.

Eventually you’ll find yourself traipsing around these huge rooms floating in space, replete with alien topology and Cthulhu gazing your way from a distance. And yet everything is so very static, and all the familiar puzzle elements are still there and work exactly as you’d expect them to. Call me crazy, but when dealing with a mythos that’s all about insanity, fear, and the alien unknown, you’d expect the game to do more with it than just set it up as a static backdrop. 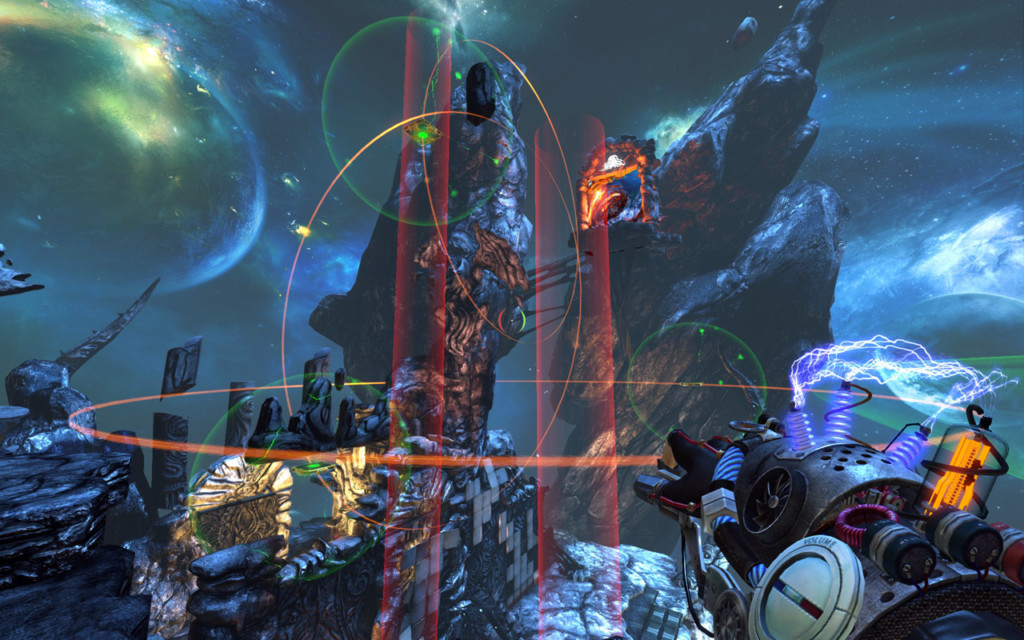 So no, Magrunner doesn’t really do much messing with your head as you wander from puzzle to puzzle, waiting for one of the few characters you’ve met so far to chime in with a situation update. Nor does it change anything about the puzzles as things get progressively weirder. And yet the story is there regardless, entirely in service to the Cthulhu angle, but not even that manages to evolve into something worth seeing. Instead you get through all the puzzles, and as your reward you get to enjoy a wrap up of all the important stuff like LifeNet and humanity’s sinful ways.

Overall, Magrunner is a solid first person puzzle-platformer, that does a few cute things along the way, but ends up feeling just a bit formulaic. While I’m not a huge fan of the Cthulhu mythos, I feel like it could have done so much more if it had actually explored the various concepts it brings up, or if it had taken the plunge and fully transitioned into a puzzle-fueled horror game. Instead we’ve got a solid 8-10 hours of brain bending puzzling all on its own, and some Cthulhu in the background. And while that’s sure to appeal to a lot of people, personally, I kinda wish Cthulhu had just kept on fhtagn.