Spellweaver, Definitely Not a Magic Spider

One of my favourite things about gaming is that, every now and then, you come across a game that teaches you something profound about yourself or the world you live in. Sometimes you learn what kind of person you truly are, allowing you to explore your psyche in new and exciting ways. Sometimes you learn that the world is better/worse/more lime flavoured than you previously assumed. Sometimes you learn about delicious baked goods. Spellweaver is one of these games that has taught me a valuable lesson about myself. I learned that I’m absolutely, horribly, ruthlessly bad at playing card games.

At first glance, Spellweaver is a fairly simple collectible card game. There are resources you accumulate and spend to pay for increasingly more powerful creatures, spells, or artifacts that you use to crush your opponent into a fine putty. If you’re any good that is.

Spellweaver has a rather wonderful and (as far as I know) unique mechanic involving the speed of a creature to determine what creatures it can enter combat with. Chevrons on the right hand side of the card indicate how fast a thing is, and a fast thing is better than a slow thing. Simply put, creatures can attack or block other creatures that have a speed that is equal to or lower than their own. It makes sense, because clearly the tectonically slow stone golem with 7 damage isn’t going to be able to squish the puny-but-lightning-fast elven scout, as said scout is a speck on the horizon before the golem can even lift a ponderous foot. Needless to say I completely forgot about this for the first couple of games I played and it all ended in tears. Lesson learned.

After the loading and login screens, the first thing that happens is that you get a popup asking if you want to do the tutorial. Upon agreeing, you see the dialogue above. This guy looks like the business, probably knows how to use a hammer, and is apparently rubbish at dealing with goblins. He palms you off to a combat trainer of some sort, and then takes credit from her regarding your training. Definitely a professional, clearly.  The tutorial itself is fairly straightforward and does a pretty good job of explaining how everything works in an engaging way. I didn’t feel like I was being spoken at about mechanics, which is nice.

Once you’re deemed adequately trained, after about 10 minutes or so of throwing cards around, you’re asked to basically pick a side and starting deck. There are six factions, each with their own capital, aesthetic, and unique mechanic. Fortunately, you’re not bound to the faction you pick in the beginning as you unlock a free second starter deck at level 5, and can pay to unlock the other regions either with currency earned in game, or real money. While I did like the hit and run tactics of the elven faction, unfortunately they are dirty, patchouli-scented hippies after all, so they were right out. That left me with two options really, the Corruption (shown above) if I wanted to be the worst person ever, reducing my opponents to a quivering mass of tears by making them throw away all their cards, or these guys: 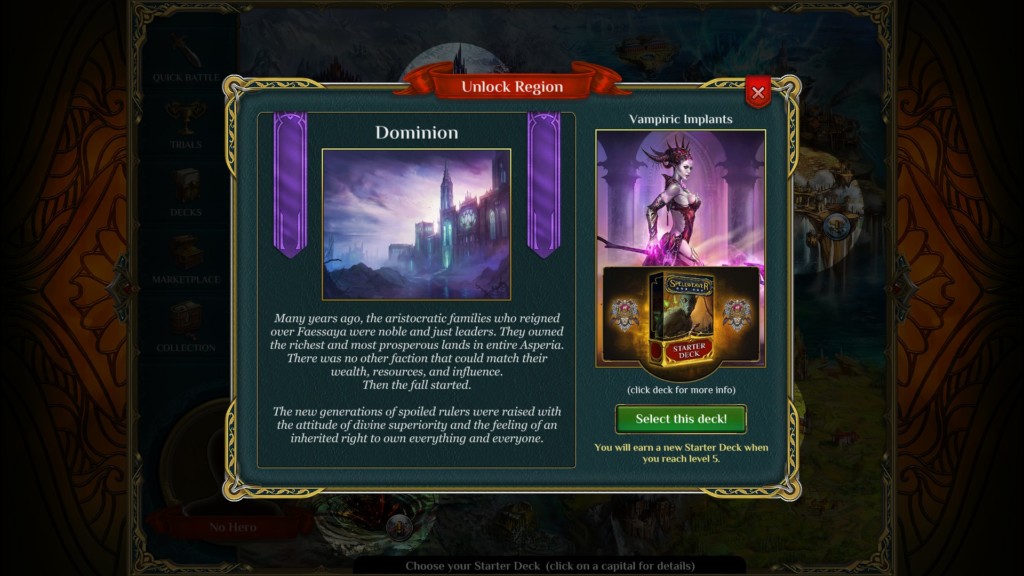 Don’t judge me. The Dominion are actually really fun to play, you either get good draw and end the game with a quick victory, or you don’t. Turns out the Corruption can make Dominion really unhappy, so I did a lot of losing to necromancers; probably karma, but I liked the colour scheme OK.

Fortunately for those of us who are middling at best, there is the option to play against AI opponents. There are also various quests one gets on the main screen, which offer a variety of rewards, usually gold, the currency earned in game to buy booster packs or other starter packs. The other currency is premium, gems which are used to buy bigger boosters or card backs. Crystal packs range from £3.95 for 250, to £67.50 for 6000 and 3 random epic cards. One can also purchase a six-month subscription (£43 for silver, £90 for gold, worth over twice as much as the silver tier), giving them starter decks and boosters each week, along with some tickets, which are used for entry into tournaments or the Spellweaver Trials. Trials are basically a draft mode, where you’re pitted against other Trial takers using their drafted deck. Drafting involves picking a card to keep from a set of three, discarding the others, until you have a full deck. The Trial ends when you’ve lost three games, then you’re awarded a prize depending on how many victories you have, with an upper limit of ten. Other gameplay options are the Friendly and Ranked game options, both against real players. Being as monumentally inept as I am, my foray into playing against real players went incredibly. I’m not going to put an adverb at the end of that sentence, because I’m sure you can fill that gap yourself.

Now, you’ve been looking at the pretty pictures I’ve been slapping all over this article right? Because holy dust sleeves Batman, do I love the art style. They’ve really taken care and brought some talented artists in to create a really lovely aesthetic. Each faction has its own look, making identifying said faction super easy. Each card type is distinct as far as I’ve seen, I’ve yet to confuse one kind of zombie from another. The sound is very nice too, you know what’s going on when sound effects hit. Of course, there’s only so many sound effects you can reasonably squeeze out of a card game, but I like the ones they have. The music is well composed and doesn’t interfere with the game play, rather accenting it. Also I have the menu music stuck in my head. That’s a good thing. This is from a team of five people. Five! Judging from the craftsmanship of this game, I am very impressed with the work they’ve done.

My gripes are minor, currently the only thing that’s even a mild annoyance is that I can’t mousewheel my way through the achievement list. Currently there aren’t all that many cards either, only 37 different cards per faction, though I’m certain that this will increase as the game goes on. Overall, despite my woeful inadequacy at card games, I enjoyed playing Spellweaver. I think one day, when I’m all grown up, I might even attempt to win at ranked instead of getting pummelled to dust and weeping. Perhaps I should start by building a deck instead of using the starter as-is. In fact, I think I’m going to go do that now.

After being set loose on the technical side of the site, CJ escaped containment and occasionally writes articles.