I can’t really remember when the last time I played a side-scrolling beat em up was. I do know it was many years ago on a friend’s SNES, back when I’d include ‘and a half’ when asked about my age, but I’d have to think long and hard to try and remember which game it was. It makes a lot of sense that games like dropped off a lot after readily available tech evolved past the limitations that brought about those games in the first place.

Still though, there were a lot of awesome beat em ups back then, and they were a great deal of fun to play, particularly when you had someone else to play it with you, and you had to contend with each other’s moves as much as the enemies’. This leads me to wonder what it was about these games that made them fun; was it the actual fighting mechanics, or was it something else?

Funnily enough, I may have found my answer to that question in Fist of Awesome, an indie title by Nicoll Hunt (mostly). And while the name kinda gives it away, I’ll just point out that this is an entirely modern take on a beat em up, wrapped up in a healthy dose of pop-culture references, 8ish bit graphics, awesome electronic music, and kicking bears in the dick. 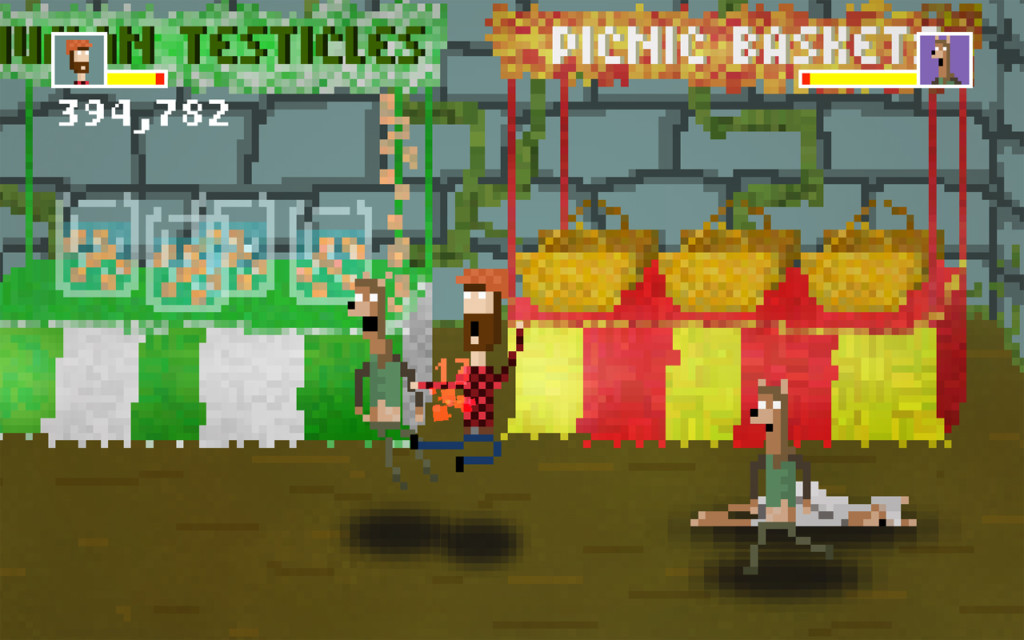 Now, before you freak out about kicking bears in the dick, I’ll just point out that they started it when they decided to mess with the timeline and become the dominant, human-consuming species on the planet. Thankfully though, messing with the past seems to have had no effect on the game’s lumberjack protagonist, Tim Burr (*sigh*), and his huge, talking left fist, the titular Fist of Awesome.

The Fist is a rather recent development for poor Tim, and it seems to have hardly any more insight into what’s going on than Tim himself, however it does have a surprisingly solid grasp of temporal physics and repeatedly punching bears in the face. Thus armed with a chatty sidekick and only one direction to go in, Tim’s in for a whole lot of bear brutality before he can get to the bottom of things and presumably save all of mankind from a grizzly fate. 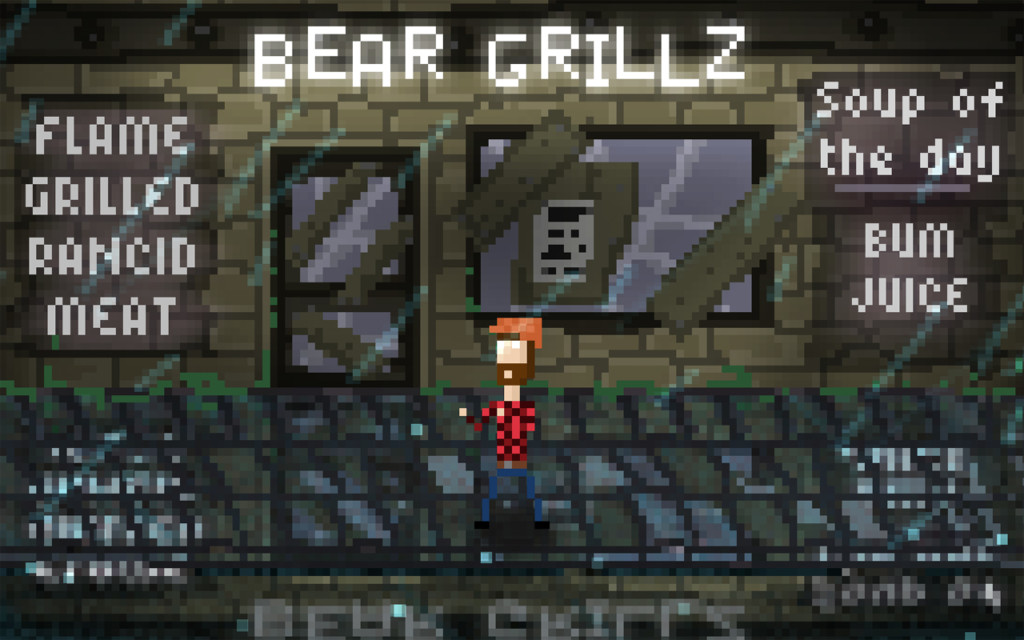 As should be obvious, the game takes a rather lighthearted approach to its story, levels and enemies, while making sure to keep the references, puns and bear dickery flowing. And while the references are certainly plentiful, they occasionally lean a little too far on the referential side, and thus tend to lack a bit of comedic punch.

They also cover what is easily the broadest swathe of topics I’ve seen in a long time, ranging from 80s metal bands, across Back to the Future gags, all the way to Game of Thrones nods. However, if any of my poor puns managed to get even a smirk out of you, odds are you’ll find most of the game rather amusing, and there are a few standout moments in there to look forward to as well.

Another important element that helps set the mood of the game is the rather awesome soundtrack, full of retro electronic tunes, that help give a lot of life to the colorful environments throughout the game. It also does a great job of offsetting the amusingly basic sound effects that accompany all of the punching, kicking and bear grunting in the game, which consist entirely of one guy making funny noises into a mic, and yet manage to feel in place. 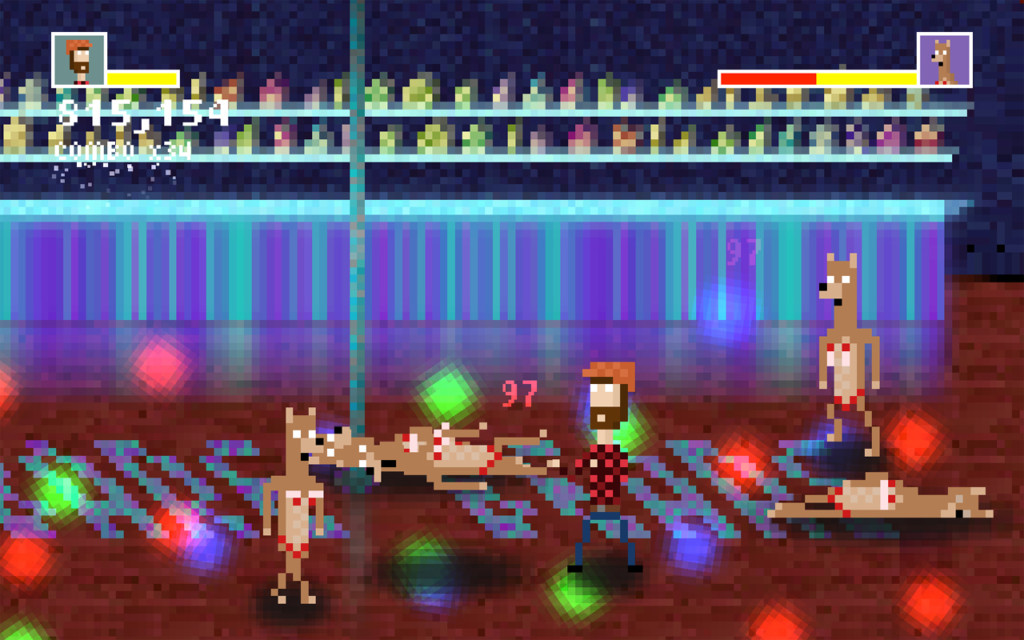 Speaking of dispensing bear-knuckle justice, the game keeps the actual fighting controls at an acceptably simple level; you’ve got your punch, kick, stomp, back-kick and special, and several ways to combine them. On top of that, there’s a basic upgrade system which lets you either boots Tim’s health, give his basic attacks more oomph, up his speed, or increase the wallop his special pack. It might not seem like there’s a whole lot of depth that can come from that, but you will need to play to your strengths if you don’t want to get mauled.

For example, a series of solid punches or a well placed jump kick will temporarily knock your enemies down, giving you enough room to toss about heavily-upgraded specials while they get back up. Or if you prefer, you can always kick your enemy in the junk, grab hold of him, and repeatedly knee him in the stomach until he reconsiders his life choices. 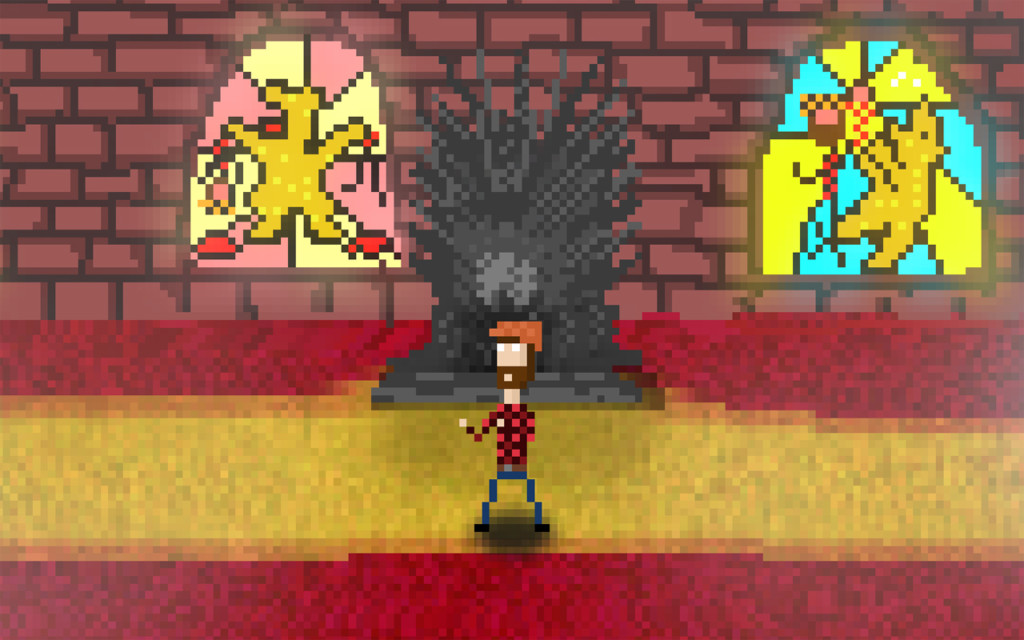 Overall, Fist of Awesome manages to strike a great balance between simple game mechanics that are still fun, and a suitably preposterous premise that’s backed up with a lot of humor. It certainly reminded me that the reason I used to like those old games is because they were carefully made so that what was in the game was all about making it fun to play. Well, the good ones anyway, thankfully I’ve long since gone past remembering the stinkers.

I’ve tried to not really spoil too much of it for you, because if you’re looking for a good old-school romp, I’d certainly recommend giving Fist of Awesome a go. The story mode will give you a good afternoon’s worth of entertainment, particularly if you wanna play through on hard, and you can also get your butt handed to you in arena mode if you’re looking for some extra challenge.

About the only thing that’s missing that I’d like to see included is a co-op mode, but given the scope of the project, it’s easy to see why it was omitted. The game is currently available on Steam for about €5, which should leave you bear of excuses (had to get one more in there). Now, if you’ll excuse me, there are some references I need to go Google, because even I’m not that old.