Opinion: On Rogue Legacy and Coprolalia

Cellar Door Games, you have created a monster. While games with the capacity to make me spend hours playing them and not even notice are hardly the rarest thing, I’ve yet to have it happen with a game that’s this hard and which I suck at this bad. The reasons for this are many, and yet they all trace back to the way the game is set up and how it handles the conventions of its own premise.

Rogue Legacy is a roguelike game, or ‘roguelite’ as it fancies itself, due to the fact that it eschews turn-based combat for realtime platform stabbing goodness. Not in the sense that you stab platforms in the game, but rather that there’s a lot of jumping, dashing and double jumping, and you also stab dudes in the process. And technically the levels themselves aren’t randomly generated, as the game picks from a collection of predefined room layouts and arranges them into a grand castle for you to trudge through. But the dying is permanent, hence roguelite! Oh, and once you’re dead, you get to play again as one of your haphazard descendants, and that little tidbit right there is where the brilliance of Rogue Legacy lies.

The game revolves around a very simple principle; you stab and blast your way through as many monsters as you can, while exploring the randomly generated castle for fancy loot and as much gold as you can pick up before you drop dead. Once you die however, you’re given a choice of 3 possible descendants to continue to play on with. Each of the descendants will be of a random class that you have unlocked, and will know a random spell. He or she may also have up to two random traits that somehow alter how that character will play, and these range from innocuous and comical, to dramatic and downright hilarious.

It’s this simple system of random generation that gives Rogue Legacy its depth and the capacity to continually surprise you with a new experience. You’ll also have to be quick to adapt to your new circumstances, but given that there’s 4 areas for you to explore, each with its own boss, you’ll have plenty of opportunity to experiment with all the various traits. Sometimes you’ll get an awesome combination of traits you like on a class you enjoy playing, and it’ll rock. And sometimes you’ll get a scrawny mage who can barely take two hits before falling over, and it’ll still somehow end up being fun.

With that alone, the game would be entirely at mercy of pseudo-random whimsy, but thankfully there are two systems in place that help make things consistent and add a sense of genuine progression. At the beginning of each run, you get to spend all the gold your previous character acquired on unlocks, upgrades and gear. The unlocks can net you small upgrades to various things like health, damage and armor, but also give you access to new classes and allow you to upgrade your existing ones. Unlocked a Shinobi but are still struggling to murder all the things? Upgrade him to a Hokage and watch him *poof* around like a madman. Believe it!

The gear and upgrades serve much the same purpose as the unlocks, and can be bought from the Blacksmith and Enchantress after you’ve acquired the appropriate plans from the various chests strewn about the castle of Doom. The big difference though is that you can always change the ones you have equipped before a run, which can be very important for a few of the weirder classes. There’s also an architect who’s services you can employ should you want to lock down the current layout of the castle so you can practice or farm to your heart’s content. Mind you, the greedy bastard will then keep the vast majority of the gold you earn, but such is the price of freedom from RNG. 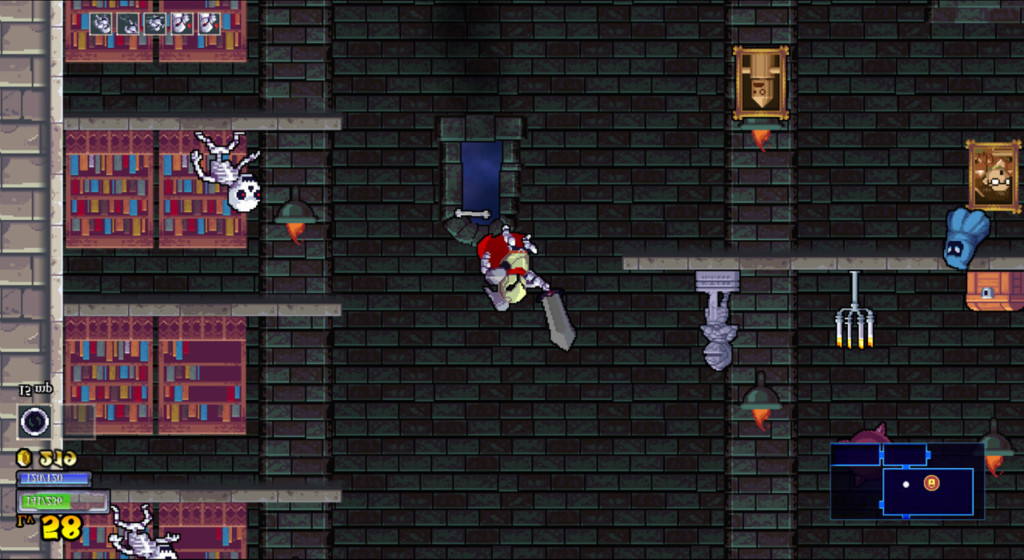 Speaking of greedy bastards, the second important system that keeps things fresh is Charon, who’s apparently the embodiment of Death with a taste for all things gold. You’ll find Charon barring your way every time you want to go into a fresh castle, and all you have to do to make him go away is give him all your money. Thus you’re encouraged to spend as much as you can on upgrades and unlocks in between runs, because no matter how perky that pretty pink bow of yours is, you don’t get to keep the change.

I should also mention that while you’re pretty much free to tackle the four areas in the castle in any order, they do follow a pretty clear progression of difficulty that’ll bite you in the butt should you get too eager too early. That’s no big deal though, as there’s always plenty of descendant butts for you to chose from, and by merely persevering you will eventually manage to work your way up to and through the harder areas. Yes, even if you suck at is as bad as I do, and my 3000 year legacy of horrific failure is a proud testament to this.

If I had to point out some flaws, they’d come down to the fact that enemy variety is a bit limited, as the enemies themselves often don’t differ that much between the areas. There’s also only so many different rooms the game has to throw at you, so expect to see the same room here as you keep playing. Despite that though, the randomized nature of the rest of the game makes for a silly amount of replayability, particularly if you’ve been focusing on one kind of hero and then decide you’d like to try something a little bit different.

So there you have it, Rogue Legacy is one hell of a fun game that will easily consume all your free time if you’re not careful, and is available for the low price of $15 on their website (which includes a Steam key), as well as your regional equivalent on Steam. I tried not to spoil most of the fun stuff, as discovering it for yourself is the best part anyway, but if you’re somehow still unconvinced or you’d like a slightly more forward look at it, Dave was kind enough to do a On First Glance of it as well.