There used to be a lot of side-scrolling beat-em-ups in the late 1980’s and early 1990’s games like Double Dragon, Streets of Rage and TNMT: Turtles in Time I could go on, but I’d be here for some time. While a few games have released in this genre over the past few years, most of them include magic and/or complicated move sets that make them very different games altogether. Enter Foul Play, a game that tries to entertain you with a good story, present a modernized version of those old beat-em-ups and win you over with an incredible amount of charm. Gather ‘round to find out if it’s style over substance, or a good all-rounder!

Play 1: Act 1
Introducing Baron Dashforth introducing himself and his sidekick Scampwick while sitting on a chair. Dashforth regales the audience with tales of the miraculous adventures he has had over his long and illustrious career as a Daemonologist. The game starts with him recounting (read “beating up people in”) his exploits through an elaborate stage-show, with the first act set in Cairo and the ancient horrors that awaited him there. Armed only with a walking stick and a broom, Dashforth and Scampwick jump into the fray to fight the evils that lay in wait!

I really don’t want to spoil the story as it’s fantastically weird and takes some pretty interesting turns, but the very first act has them being double-crossed by their guide that gets dragged off by a deranged general who you then have to kill to save the treasonous guide because “we’re still gentlemen”. The game uses a spotlight to focus in on the people talking, which they use to great effect in some of their more subtle humour. The interaction between Dashforth and Scampwick, the audience, the set and the actors playing the enemies had me chuckling and occasionally laughing out loud. It’s not necessarily a comedy, but they do a great job entertaining you. Also, read the Daemon Diary, there’s an interesting difference in tone between it and the rest of the game.

The combat system is a mix of the old side-scroller beat-em-ups and a Batman: Arkham Asylum/City like counter system where you can react to your opponents’ incoming attacks. The game has no magic, no huge AOE attacks and no insane million attack combo’s. You have a meter that fills up while fighting that allows you to go into SHOWSTOPPER mode which gives you x2 combo points, that’s it. Because of this it really harkens back to some of those earlier games in the genre and presents you with a brawler that has predominantly tight controls with only minor problems.

The game is a bit button mashy, especially when you try to go for the x200+ combo goals, my right thumb is actually hurting a little while writing this. The counter system is implemented well and it makes the combat flow much more fluently, however it presents the same problem it does in the aforementioned Arkham Asylum/City, countering is almost always the way to go. One of the tactics I used a lot is to counter-grab one of the smaller enemies and then beating the larger foe while being invulnerable, although effective, it felt a little cheap. The problem with the counter system though, is the inability to avoid getting hit from time to time, even if you perfectly time your dodge/counter. This is made worse by the fact that combat entirely revolves around building a combo meter which resets when you get hit.

The good certainly outweighs the bad though, attacks are immediate, dodges and counterattacks target the enemy you want it to (aside from the issue mentioned above) and honestly it’s a lot of fun to piledrive, bash, roll attack and counter your way through the various battles. 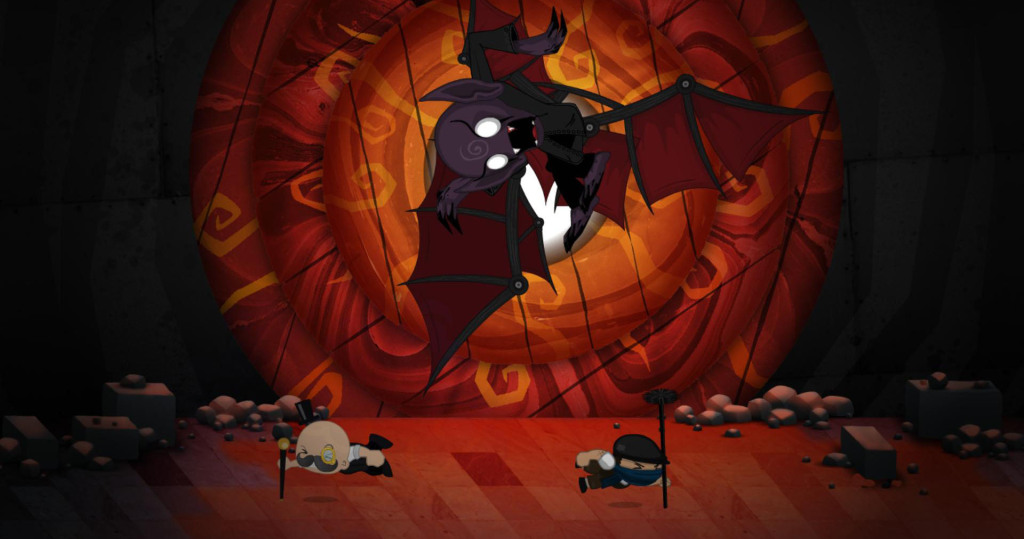 While the dashing duo are so epically British that they couldn’t possible die, the game luckily still finds ways to challenge you,  the Mood-O-Meter tracks audience happiness, Challenges give you specific tasks within the act and scenes and the game rates your performance with a 1-5 star rating.

The Mood-O-Meter is a “you suck for too long” doom counter and also gives double, triple or quadruple points depending on how happy the audience is with you performance. The Challenges range from getting a x200 combo to throwing a certain number of enemies into the breakable scenery.  The star rating is a bit of a mystery to me as the game seemed to be getting much easier further into the game, where I was getting 3-4 stars in Play 1 and 2 I was able to get 5 stars with relative ease in the second half of the game. I’m quite certain that was mostly due to skills unlocking that allowed for more battlefield control, but difficulty certainly didn’t ramp enough with the player’s skill progression.

Talking about unlocking skills, there’s player progression! You get more and more famous throughout the game with 12 ranks throughout which you unlock new skills. And I know what you’re thinking… that sounds a lot like XP! That might be true but Baron Dashforth needs none of that, he’s been fighting Daemons his entire life! Charms, when you complete the 3 challenges associated with each act, you unlock one of these modifier items. They can quite drastically alter your play style by giving you bonuses like +60% dodge distance or +3x Combo every time you counter or dodge. You can only equip two of these though, so choose wisely.

This leaves me the one thing to talk about which would make me want to play Foul Play even if everything else would’ve sucked, the presentation. It’s strange to see two theatre style games, The Puppeteer and Foul Play, come out in such a short timeframe. Both games ooze charm, but where Puppeteer has incredibly elaborate sets and feels fantastical,  Foul Play really nails down the feeling of this actually being in a theatre. The audience cheers, hollers and starts throwing hats when you do well and boos you when you’re on the edge of failure. Sets slide with weight and purpose, often things go wrong like a worker still being on set, an actor forgetting his line or the wrong setting being pulled in and then quickly being changed out. The only way to have a more theatre-like experience is actually being in a theatre.

The sound design is also top-notch, hit effects and comedic timing are all spot on, the trigger sounds are easily recognizable and the songs mesh well with the surroundings, though primarily the menu track does get a little repetitive. 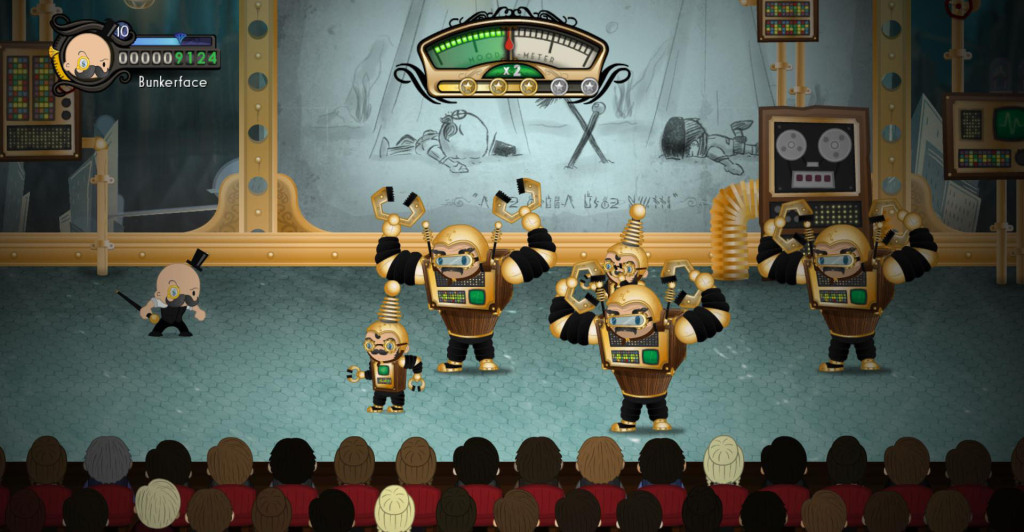 While the options menu does allow you to fully rebind your keys, keyboard or controller, the range of menu options is abhorrent. Resolutions only come in the 16:9 variety and is subsequently the only graphics options available, although the game does allow you to switch between full-screen and full-screen windowed. Bug wise I’ve encountered two slight scripting problems, but both didn’t require me to restart from a checkpoint, so pretty good!

Playing through the levels really feels like a far too ambitious show barely being held together, something that I’m happy to report can’t be said about the game itself. The 4½ hours I spent playing the game to completions were certainly very enjoyable and I would wholeheartedly recommend the game for the 15 dollars or euros they’re asking for it. If that isn’t enough for you though, the game also offers co-op with both local and online multiplayer and for you competitive types there’s also a friends and global leaderboards to brag about your 9999999999 point no-scope run.